Vivaldi is a stallion that always captivates in Europe with his strong type with radiance and movement. Always confident in his presentation, under saddle Vivaldi convinces with charisma and incredible movements. He was reserve champion of his stallion performance test and in 2007 he won the PAVO Cup for five-year old dressage horses (similar to the Bundeschampionship) with Hans Peter Minderhoud / NED.

In 2019, his son Vivino broker records selling for a massive 2 million euros at the Hanoverian Stallion Auction. Other offspring of Vivaldi have been highly sought-after and have fetched top prices at auction throughout Europe.

In 2018, as a sire Vivaldi had a spectacular year. Vivaldi produced the stallion, Vivino, who was Premium stallion and price record holder of the 2018 Hanoverian Stallion Licensing in Verden. The incredible price of 2.01 million euros topped all previous records of stallion licensings worldwide. He has produced over 35 licensed sons. Vanity Fair, by Vivaldi, won the annual Hanoverian mare chamionship in Verden. His licensed son, Veneziano won the Lusidor Prize for the best young Grand Prix horse in Frankfurt.  During his breeding career in the Netherlands, Vivaldi produced second main premium, Cennin, who became fifth in the World Cup; Desperado, who is successful at Grand Prix; Eye Catcher, two-time bronze medalist at the World Championships and victorious in the small tour; Dancer, World Champion; and Vitalis, Burg Cup winner. In 2012 Vivaldi produced the Westphalian reserve champion Van Vivaldi and the premium stallion Livaldon who was sold for 260.000€ in Hannover.

In 2008 and 2009 Vivaldi won the KNHS / KWPN stallion competition with scores up to a perfect 10.0 for trot.  Vivaldi is trained up to advanced dressage level. As a sire he knows no boundaries: So far 15 sons have been licensed in Germany, including numerous premium stallions.

In 2013 Versace was proclaimed the Reserve Champion of the Oldenburg Spring licensing in Vechta. Furthermore Vivaldi sired several champion mares. His sire Krack C won the PAVO Cup Dressage in 1996 and 1997. At the stallion performance test in Ermelo he achieved the highest scores for his rideability. With Anky van Grunsven in the saddle, Krack C won Grand Prix classes and took part in the 2002 World Championships at Jerez. 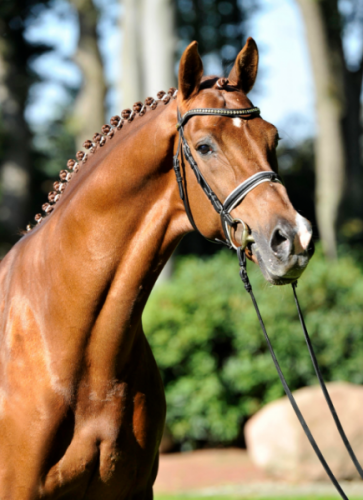