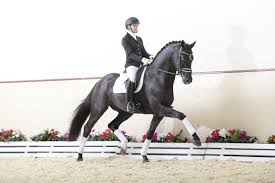 Zenon combines an excellent type with elevation, correct foundations, and three top-notch paces.  He received much recognition during his 50 days test in Adelheidsdorf, in Fall 2017, by finishing third overall out of 26 stallions, with a final mark of 8.66.  Zenon scored over 8.5 for almost all criteria.

His sire, Zonik was bred in Denmark and has been considered one of the best dressage sires in the world.  We see dam sire, Don Schufro, present twice in the pedigree and this stallion has led the FN dressage breeding evaluation for years.  With Helgstrand Dressage, Don Schufro was very successful in the international arena and was victorious up to Grand Prix.  In 2008 he won the bronze medal in Hong Kong with the Danish Olympic team.

Zenon's grand dam is full sister of the licensed stallion L'Acteur.  His great-grand sire, Lorentin I, qualified for the German dressage championships in 1998 and later became successful up to Grand Prix with Wolfgang Schade.  In 1999, Lorentin I, set a milestone in his career by producing the champion of the Holsteiner licensing, Lusello.

Raimondo and Roman bring the performance blood of the legendary Ramzes AA to this newcomer. Zenon also represents the Holsteiner line 4025 and many known, licensed stallions have come from this line.