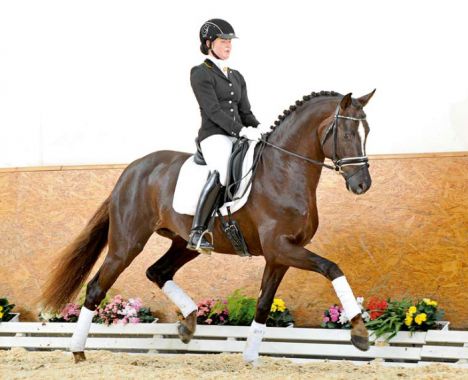 This picture perfect liver chestnut is a breeding newcomer for 2014. Clearly influenced by Donnerhall, Sir Picardi was convincing at his 30-day test in 2013 with high scores of 8.5 and 9.0 for rideability. Since the licensing, his progress has been confirmed by wins in his first riding horse and dressage tests. His outstanding gaits and ability to collect are impressive.

His sire, Sir Donnerhall I, needs no introduction. For years, he and his offspring have dominated the licensings, Bundeschampionships and mare tests. He belongs to the most outstanding sires in Germany.

Sir Picardi's first class dam sire, Don Picardi, achieved noteworthy results in his 30 day performance test and is an outstanding example of the combination of Donnerhall and Pik Bube I. The Holstein reserve champion, Levantos I, an exceptionally framed and great moving stallion is found in the third generation of Sir Picardi's pedigree. Levantos was successful in both dressage and jumping and produced numerous internationally successful jumping horses.

The legendary combination of Donnerhall and Pik Bube I finds exceptional expression in this stallion.