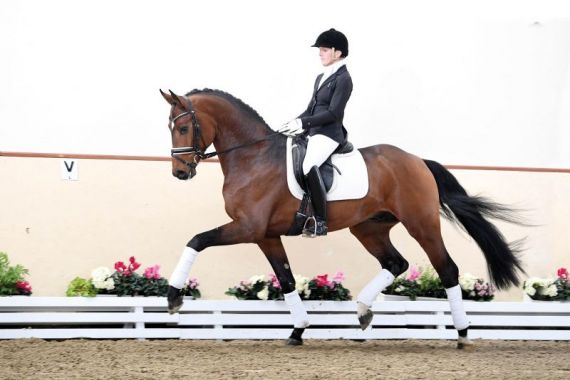 Fasino is descended from famous parents and has a bright future as a sire. At his stallion performance test in 2018 in Schlieckau, he impressively proved this with high marks for his paces, performance and rideability.

His sire Foundation placed sixth in the Burg Cup final with Matthias Alexander Rath in 2017 and, after various placings in international Grand Prix competitions, reached the Louisdor Prize Final in 2018. In 2012, he was proclaimed Oldenburg main premium winner for the quality of his first foal crop. Foundation's offspring have proven quite successful such as Ferrari OLD/Andreas Helgstrand/DEN who was named Vice-Champion at the World Championships for Young Dressage horses, Feel Free OLD/Bernadette Brune who placed fourth at the German championships and Fantasy.

His dam is St. Pr. St. Fasine OLD, Oldenburg Champion Mare, German Federal Champion, P.S.I. auction record top price and was victorious at S-level competitions. She is the full sister of For Romance I, Oldenburg Champion Stallion, Main Premium winner and Burg-Cup finalist and of For Romance II, premium stallion standing at our pS. Fasine is also the half-sister of Champion Stallion Feinrich and the Oldenburg Champion Mare Fürstin Gesine (both by Fürst Heinrich), of Dante PS (by Dante Weltino), who also stands at PS, as well as, of Mount St. John Best of All (by Bordeaux), British Dressage Champion and placed up to Small Tour level and who is also the dam of Best of Mount St. John OLD (by Fürst Romancier), Vice Regional Champion and placed fifth at the German Championships.

Sir Donnerhall I, who appears in third generation, has already earned the status of "trademark stallion". Himself second Reserve champion of his licensing, Regional Champion, record winner of his stallion performance test, Vice-World Champion of young dressage horses, German Champion and winner of the main premium, he can refer to almost 100 licensed sons.

In the fourth generation is Don Schufro, Danish Champion and Team bronze winner at the Olympic Games in Hong Kong/HKG in 2008 with Andreas Helgstrand. Voltaire also descends from the same dam line.