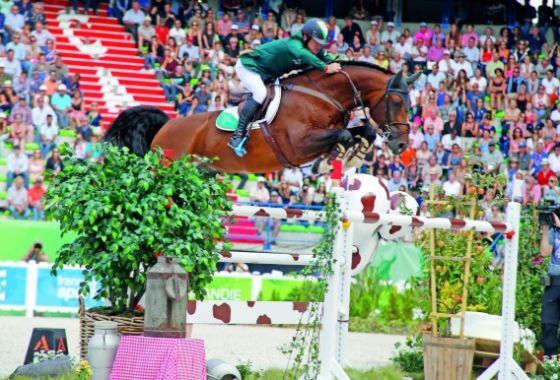 All Star has a powerful pedigree of great sires: Argentinus, Almé, Ramiro and Winnetou. Breeder's are offered a genetic rarity with this European Champion stallion.  All Star was actively competing under Denis Lynch since 2010 before he retired from sport in 2018 to focus full-time on breeding.  In 2018, All Star had many placing in CSI2* and CSIO5* classes including a Class 12 win at Valkenswaard 1.45m. 2017 was a busy year for the duo with over 15 CSIO5*/CSI5* jumping events and good results.

In 2010, Irishman Denis Lynch led the Hanoverian Vice-champion to his first successes in the International Youngster Tour at age five, followed by victories in the best events in Cannes / FRA, Goteborg / SWE, Barcelona / ESP and Valkenswaard / NED. All Star has participated in four World Cup finals and made his championship debut at the 2014 World Cup in Caen / FRA with a place in the top ten in the individual ranking. In 2015 he reached the individual final at the Aachen European Championships, and in 2017, after winning Team Gold at the European Championships in Gothenburg / SWE, he obtained tenth place in the individual ranking.

The granddam is none other than Rinnetou Z / Piet Raymarkers / NED, an internationally successful mare. She also produced the approved stallion Chardonnay Z (from Caretano). Her stepsister Zalza (from Zeus) / Nick Skelton / GBR and half-brother Cornelis Z (from Cor de la Bryère) had international success, while half-brother Rival Z (from Ramiro) was an approved stallion.