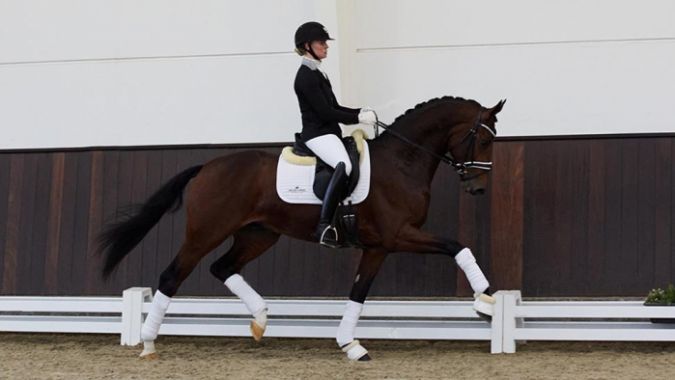 A stallion with three exceptional paces, Be sure always presents himself in an uphill and balanced manner with a lot of power. He has a lot of qualities that make him desirable for dressage sport and this noble bay stallion, with his amazing presence, was not only called to the premium ring of the year's best stallions in Verden, but was also by far one of the most sought-after stallions at auction. He was sold for the second highest price of the auction to Helgstrand Dressage who is excited to secure this jewel of a stallion for their breeding program.

His sire Benicio won competitions up to Grand Prix with Jessica Lynn Thomas/SWE and in 2011 he was German Bundeschampion of the six-year-old dressage horses. He has produced around 20 licensed stallions, including the Oldenburg Champion Stallion Bonds/Beatrice Hoffrogge as well as the premium stallions Ben Benicio, By Your Side, Best Buddy and Be Sure. Bon Vivaldi NRW was bronze medalist at the Riding Horse Championships (3 y.o.) in 2019 and Brighton secured silver (4 y.o.) in 2020. Brasilia (3 y.o.) already won the silver medal in 2016.

His dam Hanoverian .Pr.St. Susi Sorglos was champion mare of the show in Grossenwörden and placed at the Herwart von der Decken show (Ib) in 2017.

His dam's sire Scuderia was Reserve Champion of the Oldenburg Spring Licensing in 2012 and is internationally successful in Young Rider dressage competitions. Four of his sons have been licensed. With Scarlett O'Hara, he produced the current Vice Westphalian Champion, who also came tenth at the German Championships.

The thoroughbred dressage line founder Lauries Crusador xx appears in the third generation of the pedigree. His grand-dam St.Pr.St. Lady Laurie is the full sister of the licensed stallion Le Louvre. She was also successful at the Herwart von der Decken show (Ic) and was named best half-blood mare in Elmlohe in 2008 and 2009.

The stallions Fortunato H2O (by Floriscount), who is licensed in the US, Amascio (by Amateur), Donar Weiss GGF (by De Niro), numerous sport horses, including Guyana, individual silver medalist at the European Championships in 2013 in Vejer de la Frontera/POR, premium mares, such as St.Pr.St. Galaxy, Champion Mare of the European Show in 1994 in Brussels/BEL, and auction horses also descend from the dam line of Sabimira.