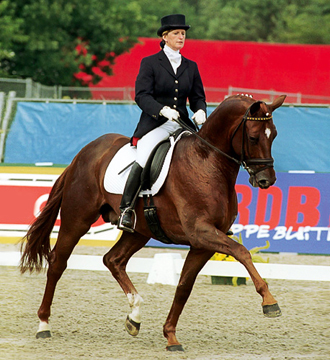 Since 2013, Dimaggio's offspring have reached the upper house of dressage. Half Moon Delphi ridden by Michael Eilberg was a member of the British European Championships bronze medal team in Herning, Denmark, and Headmore Delegate has been successful in the CDI's at Grand Prix.

Following Woodlander Farouche's incredible successes in 2011 and 2012 (Dimaggio as damsire), three offspring of Dimaggio placed in front at the 2013 World Championships for young dressage horses: Discovery OLD won the bronze medal, Duke of Britain placed fourth, Diamigo was ranked sixth. And in 2014, Del Magico ridden by Stephanie Dearing took home the silver medal for the 6 yr. old horses in Verden.

The success of Dimaggio's offspring in recent years comes as no surprise since this has now been happening for a long time now. Dimaggio's daughter, Cherie, was the 2001 World Champion of six year old dressage horses and hands down winner of the 2003 Nürnberg Burgpokal. Twenty of Dimaggio's sons have been licensed. Among them are the finalist of the Bundeschampionate, FS Demirel, the Premium Stallion and Oldenburg State Champion, Diamo Gold OLD, the second Oldenburg Reserve State Champion, Dylando, and the Austrian National Champion and competitor at the World Young Horse Championships, Bartlgut's Duccio.

Dimaggio's sire, Don Primero, was a 1990 Bundeschampion and was highly successful in international Grand Prix. Dimaggio's damsire, World Cup I, won his performance test, was the DLG Reserve Champion Stallion twice, received the "Hanoverian Stallion of the Year" award and sired numerous dressage horses such as Watussi, What Joy, Willi the Kid, Walamo, Water World and Vino Veritas. Through the half Thoroughbred stallions, Lindberg (by Der Löwe xx) and Emir in the following generations, the line goes back to the Dannenberg breeding area.

Dimaggio passed his performance test in 1999 in Neustadt/Dosse with a score of 133.39 (2nd place) in dressage, and proceeded to place 4th with the best at the Bundeschampionate before he left for England. After his arrival in England he immediately became the Young Horse Champion. In 2000 in Arnheim (NL) he became World Champion of five year old dressage horses, and in 2002 and 2003 under his rider, Suzanne Davis, Dimaggio won and placed in various tests up to Inter I. During his breeding time in England, Dimaggio sired the 2003 British Warmblood Champion and the British Sport Horse Champion.

Dimaggio has also produced top selling auction horses. His licensed son, Di Magic, was the top priced horse at the 2011, 75th Jubilee Oldenburg Elite Auction in Vechta selling for 240,000 Euro. At the same auction, the chestnut gelding son, Discovery, sold for 95,000 Euro, and the Dimaggio daughter, Dezemberspitze, was the top priced horse at the following Oldenburg Winter Mixed Sales Auction going for the price of 100,000 Euro.

At the 2006 German Foal Championships, Dimaggio was the sire of the Reserve Champion Filly (dam by Fürst Heinrich), and his foals continue to be impressive and successful to this day. 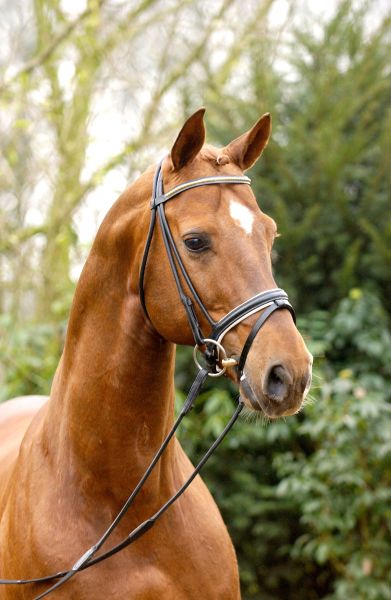 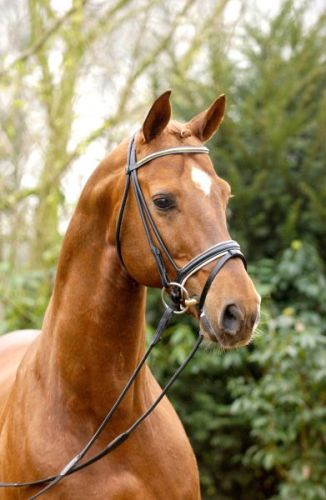